Aerials is a sport of the freestyle skiing discipline in which athletes perform various in-air tricks.& Aerialists ski off 2-4 meter jumps, that propel them up to 20 meters in the air. Once in the air, aerialists perform multiple flips and twists before landing on an inclined landing hill.

Instead of perfecting their flips and twists over the snow, aerial skiers try out their new maneuvers on ramps that launch them over huge swimming pools, as seen at the Utah Olympic Park.

PCSS Aerials is the premier Aerial Program in the country, putting athletes on the US Ski Team year after year.

PCSS is dedicated to the development and growth of young athletes in the sport of Freestyle Aerials. Our goal is to ensure each athlete is given the opportunity to reach his or her full potential in the sport and life by instilling dedication, sportsmanship, building confidence and strong character. We value integrity, commitment, and personal growth. We believe in a positive attitude, positive environment, and a positive experience. 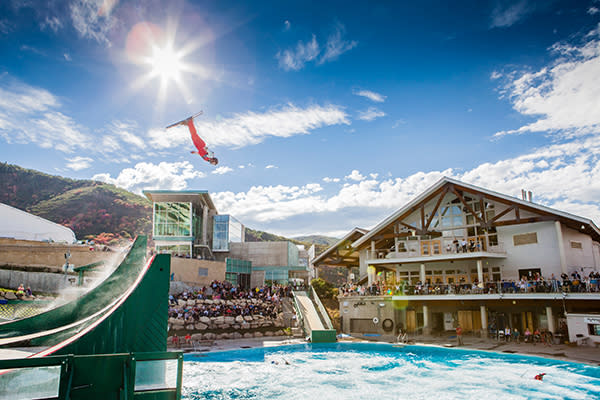 Aerials summer program is for the competitive aerialist who wishes to maximize athletic opportunities.  Athletes in this program are typically on a competitive path and have a high level of skills.  Training options include: full time (87 days), part time (45 days) and punch passes (3, 5 or 10 increments).

If you are new to the PCSS aerial program, please contact Jack Boyczuk before signing up for a program.

This summer we are offering a 3-day introduction to freestyle camp for athletes with skills in one or more of the following sports: gymnastics, trampoline, power tumbling, diving and skiing. We are looking for athletes between the ages of 12-19 with Olympic dreams and a strong desire to learn more about the Freestyle skiing disciplines of aerials and/or moguls. The cost of the camp is $400 and includes water ramping and trampoline sessions as well as a few other activities at the Utah Olympic Park. Boots, skis, wetsuit, helmet, and life jacket will be provided if the athlete does not have his or her own. A daily schedule and other camp details will be emailed out to participates.