What is Devo Freestyle?

Devo (short for development) Freestyle is a developmental program which teaches the fundamentals for all PCSS Freestyle (Aerials and Moguls) and Freeski (Park & Pipe and Big Mountain) programs.  Athletes in the Devo Freestyle program will focus on basic to advanced freestyle elements, including box/rail sliding, skiing moguls, jumping and landing as well as becoming an overall stronger skier. Athletes will learn how to apply these fundamentals to the terrain park, moguls, aerials, and big mountain.  T

Though this program does not teach fundamental skiing skills from scratch (i.e. ski school), we will continue to refine these skills throughout the season as applicable.

Participants will develop skills from all disciplines in a fun, safe and inclusive atmosphere at the Utah Olympic Park (UOP), Park City Mountain, and Woodward Park City (Devo Comp Team only). Athletes will also have the opportunity to participate in fun events designed to introduce them to competition.

Our goal is to enable young athletes to have fun skiing and kindle a lifelong passion for the sport. We strive to help them develop friendships and positive relationships with teammates and coaches. We will develop core freestyle skiing skills, and enable athletes to find their passion by exposing them early to a variety of disciplines, including moguls, aerials, big mountain, slopestyle and halfpipe. 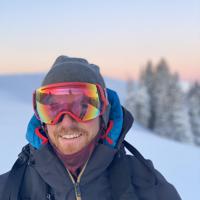 I grew up in Boise, ID and started skiing when I was 5 years old. I joined the local Freestyle team when I was 8 and started competing in moguls when I was 12. I officially "retired" from competing in 2008 when I moved out to SLC to attend the University of Utah and then graduated in 2012. I started coaching in 2009 for Axis Freeride here in PC and have gone from a part time coach to lead coach to full time coach to head coach to now director of the Freestyle Development team.