WINTER IS IN FULL SWING!

PCSS has started the New Year in very high gear with every division training, and in most cases competing, across multiple venues. Athlete enrollment has hit an all-time high with close to 1,000 athletes enrolled at PCSS! This is up from 769 athletes this time last year.

In the last four weeks alone, PCSS has successfully hosted/co-hosted: Aerials NorAms, Junior Nationals and Nationals, an Intermountain Division mogul event at the UOP and the USASA Futures Tour at Park City Mountain. I am proud to report that the testing and quarantine protocols we put in place in collaboration with the U.S. team and Big Mountain West/USASA for all participating athletes, staff, volunteers, judges and officials have been a success and should provide us with some best practices and a roadmap for upcoming events.

Thank you to all the parents who have volunteered on hill and behind the scenes for these events! We are also incredibly grateful to everyone who continues to respect our “no spectators” policy so we can continue to keep our athletes competing and racing safely.

In addition to regular programming and competitions, we successfully launched our PCSShredders program in January with 25 new participants enjoying everything that PCSS has to offer. Thanks to funding support from the Utah Olympic Legacy Foundation and recruitment support from SOS Outreach, we were able to provide full scholarships to six Latinx participants in the snowboard portion of the program.

With enrollment up, COVID-19 positive rates surging past what the community experienced last spring and race/event schedules changing constantly, PCSS staff is working harder than ever to deliver these programs and races. THANK YOU to all of our coaches and staff here at PCSS. You are the difference makers!

PCSS is partnering with Park City School District's Outreach Coordinators to provide food and clothing to local families impacted by COVID-19. If every PCSS family donated one of the URGENT NEEDS items on the list below we could make a meaningful difference in our community. Please gather your gently used clothing items or pantry items and drop them in the bin when you pick up or drop off your athlete! You can join us in giving back HERE.

Sienna was recently featured in the Park Record

To find out more about her yoga classes check out www.yogieflow.com (click SNOW) 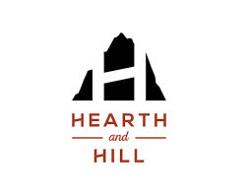 THANK YOU "DINE OUT" PARTICIPANTS

Thank you to Hearth and Hill Restaurant for hosting two amazing PCSS "Dine Out" Events. We appreciate so many of our members, board members and staff showing up for dine in and take out. Thanks to you, we raised $2100 for PCSS! 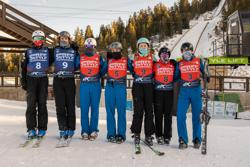 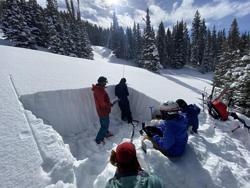 Several big mountain team athletes recently completed their Level 1 and Level 2 avalanche courses along with a companion rescue course. In light of the avalanche fatalities very close to home, these teams want to spread avalanche awareness to our community. In programming news, Alli Macuga has been invited to the Freeride Junior World Championships hosted in Verbier, Switzerland. 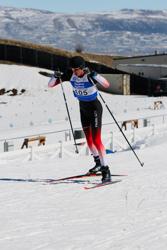 PCSS Cross Country has been laser focused on introducing more local youth to cross country and increasing participation in our programs. We have added a Club Team for high schoolers, continued to expand our development programs, and recently piloted a “mini-glider’s” program for 4-6 year old’s. Next week we will introduce the Shredders program to cross country skiing and will wrap up YSA programs. We have more than 200 local athletes skiing and training with us!

We have also been fortunate this season that some of the most competitive races in the country have been held in Utah, greatly reducing how much we travel during the pandemic. Two PCSS Cross Country skiers, Wes Campbell and Sidney Bennion qualified for Biathlon World Juniors on February 27 - March 6th in Obertilliach, Austria based on qualifying events at Soldier Hollow. This is the 1st time ever that PCSS athletes have qualified for this prestigious event. The comp team recently traveled to Bozeman and will go to McCall on February 12th.

A great way to introduce youth to cross country racing is through the local Wasatch Citizen's Series. We had more than 35 PCSS skiers compete on January 23rd, more than any other local club, most of whom were new to racing. 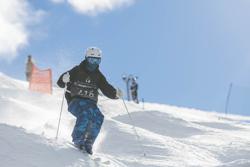 The team had their first FIS event in Winter Park, CO. 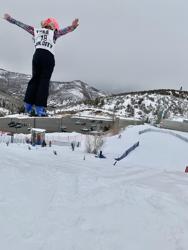 Holland Fike soaring during Get Out & Play

The new year is off to a great start with for PCSS's Ski Jumping and Nordic Combined team. We've been introducing a number of kids to the sport with Get Out and Play, PCSShredders, and try-it days for other PCSS athletes.

Many of our club members participated in a trip to Steamboat, CO for a competition against the Steamboat Springs Winter Sports Club. Our athletes left with a smile on their faces, great jumps under their belt, and a dozen medals won in the jumping and nordic combined comps.

Many of our new jumpers are continuing to jump for the rest of the season, and we're excited to be building our program up! 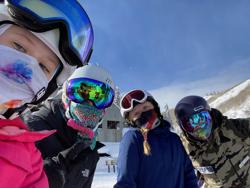 Local training is ongoing and has not experienced any interruption, and coaches are seeing great progress at all levels within the program!  Two PCSS Snowboardcross athletes have been competing at World Cups in Valmalenco, ITA, and upcoming events in Reiteralm, Austria and Tbilisi, Georgia. 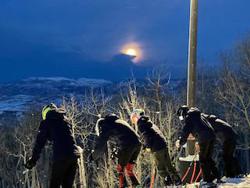 Training has been fantastic at both PCM and at the UOP! Hyeway, the UOP training venue, opened for early season access in mid November providing our athletes access to one of the best and most challenging training surfaces in the country. Similarly, the race venue at PCM is up and running. Huge thanks to our partners at PCM for keeping our skiers training and competing at home.

At the Wes Barron series in Jackson, the U16 and FIS athletes won all but one race of the series and had several top 15 performances. Cole Potter won the first men's race and Jonathan Brain won the second and third races, which put him in the lead for the Bryce Astle IMC Overall award that is given at the end of the season. On the ladies side, Carly Hamilton and Arkie Lennon each won a race.

At the U14 level, athletes competed in Sun Valley at their first qualifier. Although conditions were challenging, Maisie Kostuchenko earned a podium spot in the GS and Jack Morris was on the podium in the slalom.

At the U12 and under level, athletes from the U12, Devo, and part time programs dominated the field at Snowbird. Ford Jensen and Oscar Hochman had overall wins at the series.

The South Series had to change its race format this year due to COVID-19 quota restrictions. Therefore, athletes are broken into different groups throughout the series rather than racing all together. For this reason, it is hard to say exactly how well our athletes stack up against the competition but all the athletes are skiing well and had a good series. We were especially excited to see how well our Part Time athletes performed on the 29th.

The Devo team just finished a month of moguls and are now starting to transition into park and pipe for the month of February. At the end of February, there are a few athletes who will be competing in their first big mountain competition at Park City Mountain.

To start the season, the shredders spent three weeks doing alpine racing. They are currently finishing up their last week of nordic jumping before moving into two weeks of cross-country skiing. After cross country, our shredders will move into three weeks of freestyle to finish the program.

The kids have had guest coaches and former Olympians including Eric Schlopy and Billy Demong to help them out and to inspire them in their respective disciplines.

Thanks to the generosity of the Utah Olympic Legacy Foundation, several local athletes identified by SOS Outreach received full scholarships to participate in the PCSShredders program!

Park and Pipe just completed the USASA/FIS Futures Tour competition in Park City. While working closely with USASA and US Ski & Snowboard, PCSS paved the way for FIS Freeski competitions in the U.S. with the inaugural event of the season. Big thanks to all of the volunteers, mountain staff and officials who went above and beyond to make this happen.

PCSS will be sending more than a dozen athletes to the US Revolution Tour NorAm competitions in Aspen and Copper Colorado February 19 - March 3.